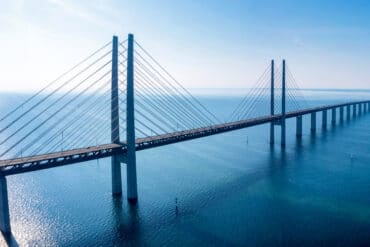 Øresund Bridge: Your essential guide to the bridge between Denmark and Sweden

What is Nordic Noir: Step into the dark world of Scandinavian crime fiction

Backpacking in Sweden: The complete guide for Swedish backpackers

What is surströmming? An introduction to Swedish fermented fish

What is surströmming? And, is foul-smelling fermented herring more than just an online trend?

The above questions are trending far more often these days, as social influencers search for new ways to entertain their followers with deep dives into unique cultures.

Whether you’ve heard about surströmming on YouTube, or you’re a fan of all-things Swedish, you’re in the right place.

Surströmming is a kind of fish delicacy from Sweden.

If you’ve heard of things like crayfish parties, or you’ve ever eaten from a Swedish smorgasbord, you’ll know fish is a pretty big deal in Sweden.

There are few fish more globally infamous than the dreaded surströmming.

Known for being the world’s smelliest food, surströmming has earned the attention of seafood lovers, and daring eaters everywhere. What’s more, this herring is a regional delicacy and a huge tradition in Sweden.

Here’s what you need to know.

What is surströmming? Swedish fermented fish

Surströmming is a lightly salted form of Baltic herring, often served in a tin of brine.

It doesn’t sound so bad at first, but this is also the smelliest food in the world, and something many people will struggle to eat (even with an iron stomach). Despite being a traditional delicacy in Sweden, surströmming is quite the challenging meal.

During the surströmming production process, only enough salt is used to prevent the Baltic herring from rotting while it ferments. The herring then sits for about 6 months to gain its acidic taste, and strong smell.

The surströmming fermented fish can be eaten at any time of year in Sweden.

Fermented herring, and all kinds of herring, are often common in festivals, particularly during the summer. There’s a special surströmming festival held each year in the north of Sweden, specifically for eating fermented Baltic herring.

Thanks to the aggressive rotten fish smell, we’d recommend only ever eating surströmming fish outdoors, and potentially with a bucket nearby (just in case).

Notably, traditional surströmming does include the whole herring (guts and all). If you’re looking for a slightly easier way to experience the flavor and smell, we’d recommend choosing a pre-gutted and beheaded version.

Everyone wants to know why the surströmming smell is so bad.

The extreme smell is the reason surströmming is so unique, and why it’s often defined as the world’s smelliest food. According to a Japanese study from 2002, this fish is easily the most “putrid” smelling food in the world.

The food is even worse than the Korean Hongeo-hoe and Japanese natto foods, which have both been ranked as “extremely smelly” over the years.

Describing how the world’s smelliest food actually smells is difficult. Some people say the smell naturally adapts to become the thing you find most disgusting, mimicking things like dirty nappies or rotten meat.

As soon as you open the can, the smell hits you like a brick wall. It’s important not to spill anything on your clothes or the table, or you could face the stink for days.

Some Swedes recommend opening your can under water to reduce the surströmming smell. Others think the best thing to do is take a big whiff when opening the can to desensitize yourself. We’re not sure if this really works, of course.

Wearing gloves is often recommended, even if you have kitchen utensils to help you pull the fish out of the can. You don’t want to end up with any of the juice on your fingers.

So, if the surströmming smell is so bad, why would you even eat this fermented fish?

The Swedes love the taste, and many other people around the world have agreed this unique food is quite the delicacy. To create the unique surströmming taste, the Baltic herrings are caught in May, just before they have a chance to spawn.

Next, they’re brined in a strong salty water to pull out the blood. The fish are then beheaded, gutted, and kept in a weaker salt brine for several weeks.

Usually, canning begins in July. The fish might seem a little “off” when you see their bulging cans. The surströmming will be left to ferment for at least six months, which is where the acidic taste comes from.

If you like the sharp flavors of a strong blue cheese, you’ll probably enjoy surströmming. The umami flavor is quite the acquired taste, but its something the Swedes generally love.

If you’re a beginner eating surströmming, you might not be able to enjoy the taste fully straight away. The smell can really get into your head, so you start feeling as though you’re tasting the smell, rather than the fish.

It might help to wash your surströmming down with a shot of aquavit or two, like the Swedes do.

How to eat surströmming the Swedish way

Figuring out how to eat surströmming can be difficult at first. The Swedes have various recipes available online. For most people, however, the real challenge is keeping the first bite down.

Surströmming in Sweden usually comes with a side of tunnbrod (crispbread), or flatbread.

If you’re looking for a full meal, try eating surströmming with finely chopped onion, sour cream, fresh dill, and boiled potatoes. Keep the schnapps handy too — as they’ll work as a useful palette cleanser if you’re struggling with the flavor.

In Sweden, eating surströmming is often a social event. There are festivals and parties where you can assemble sandwiches with your pals. Just remember to open the can in a bucket of water to help dissipate the smell and wear your gloves.

What is Iceland known for? Interesting facts about Iceland

One of the biggest risks of eating surströmming, is the can itself. The pressurized can pops open quite dramatically, thanks to all the internal air created by the fermenting process.

This is why experts recommend taking the can outside, where you can get a lot of fresh air, and dunking it in a full bucket of water.

To safely open surströmming, puncture the can while it’s fully submerged to allow the air to seep out slowly. Submerging the can reduces your risk of the fish exploding in your face — which isn’t fun. Plus, you can wash the fish before preparing them this way too.

Can surströmming make you sick?

Thanks to the association with rotted fish, many people wonder “is surströmming safe to eat?” or whether the food will make them sick.

First of all, surströmming is completely safe, as the fish is fermented, not rotten. The high salinity levels of the brine stop bacteria from growing, provided the tin stays intact. You also need to keep your can refrigerated.

Heat can significantly damage the internal contents of a surströmming can, turning it mostly into mush. Again, this is unlikely to be dangerous, but you won’t get the true taste this way.

Notably, although surströmming isn’t dangerous, it can make you sick, simply from the smell. If you don’t know how to eat surströmming safely, and you haven’t been exposed to the odor before, be cautious.

After you’ve got a first whiff of the fermented fish, you might ask “why do people eat surströmming at all?”

As mentioned above, surströmming is gaining more attention these days thanks to viral challenges and trends. However, anyone can go and try the full experience of fermented herring for themselves by visiting various parts of Sweden.

Eating surströmming is a pretty big deal in the country, so you should find a handful of cafes and restaurants who can serve it to you.

If you’ve never had surströmming before, and you’re keen to taste the flavor without being too overwhelmed by the smell, it might be best to get some help. Having a real Swedish local prepare your surströmming for you should give you a more authentic experience.

Plus, if you don’t have to deal with the fish before eating it, you may reduce your chances of being sick.

It’s fair to say the Swedes have some pretty interesting traditions, but surströmming is one of the best-known around the world.

Are you brave enough to try the world’s stinkiest fish yourself?

Now read these:
—Shining light on Swedish Midsommar
—Welcome to the Swedish crayfish party
—The meaning of Lagom in Sweden
—Enjoying a Swedish Fika moment
—The history of Swedish fish sweets

Where is Jutland? Your essential guide to Jutland in Denmark

Camping in Iceland: The best campsites in Iceland

What’s the best spa in Copenhagen? A complete guide