Øresund Bridge: Your essential guide to the bridge between Denmark and Sweden

What is Nordic Noir: Step into the dark world of Scandinavian crime fiction

Backpacking in Sweden: The complete guide for Swedish backpackers

Swedish fish are a popular treat around the world.

We’re not talking about the vibrant fish you find in lakes, ponds, and even the sea close to Sweden – but the playful little candies that children and adults adore.

Even if you’ve never ventured to Sweden and discovered its mysteries before, you’re probably familiar with Swedish Fish.

However, like many people, there’s a good chance you don’t know much about where these sweet treats came from.

As one of the better-known gummy candies around today, we thought it was about time we took a deep dive into Swedish Fish history, to let you know where these delights came from, how they’re made, and what flavor they really are.

Let’s start with one of the most common questions. Are Swedish Fish Swedish?

Today, you can find Swedish Fish sweets in a variety of stores and supermarkets around the world. These treats are popular for a lot of reasons.

Unlike most gummy sweets, they don’t feature any animal-based gelatin, which means that they’re surprisingly safe for vegetarians and vegan too. Just keep in mind that there is some beeswax used in the traditional Swedish Fish recipe.

The most obvious answer to the question, “Why are Swedish Fish called Swedish Fish?” is because they started life in Sweden. The Swedes refer to the candy as “pastellfiskar” which means “pale colored fish”.

Originally, when these fish were available in Sweden, they had the word “Malaco” on the side, rather than “Swedish”.

Some people say that the Swedish Fish in Sweden are also a deeper shade of red than the colors you’d find in America, and elsewhere in the world.

You can also sometimes find a version of the Swedish Fish called Malaco Salt Sill – or Salmiak. This is a special version of the treat which features a highly popular flavor among Nordic countries.

Swedish Fish first arrived in the US in the 1950s, sold by the Malaco confectionery company. To highlight the Swedish origins of the candies, Malaco even stamped the word “Swedish” on the side of each fish.

It’s also worth noting that fishing is one of the most common things to do in Sweden. Whether you’re looking for a career or a hobby, there are plenty of fishing opportunities.

Within a decade, the brand had already established it as a leading candy option. Today, Swedish Fish are swimming in a new pond, owned by the company, Mondelez international.

This might explain why at one point, there was a limited run of Swedish Fish Oreos, where the cream in the center was tinted red.

Speaking of variations of Swedish Fish that didn’t quitework out elsewhere in the world, the Malaco company did introduce the licorice version of the candy for a short time, but Americans really didn’t appreciate the taste.

You can get a more Americanized version of the candy today, which includes an assortment of flavors, usually spreading across cherry, lemon, lime, and orange.

Swedish Fish flavor: What is that mysterious taste?

Although Swedish Fish sweets have gained a lot of popularity over the years, most people in the US still couldn’t tell you what they’re supposedto taste like, without checking the label. The Swedish Fish flavor, like the rest of the candy is distinctly Scandinavian.

Most people assume that red candies in the western world will taste like a common red fruit. There’s cherry, strawberry, raspberry – sometimes even watermelon. However, the taste of Swedish Fish sweets doesn’t really align with any of these options.

Of course, if you live in Sweden, or visit a Scandinavian country, you’ll discover that the real flavor of the candies is actually very popular in that part of the world. Most people agree that the official flavor of Swedish Fish is something called the lingonberry.

This is a very common food in Scandinavia, and something you’ll find on a lot of shelves and in various recipes throughout Sweden. You might have even noticed lingonberry treats on your trips to IKEA.

Interestingly, although local Swedes believe without a doubt that Swedish Fish are lingonberry flavored, there hasn’t been any official commentary from the manufacturers of the sweets that would confirm this is the case.

It definitely makes the most sense as the genuine flavor choice, however. 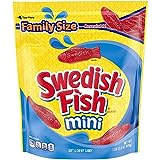 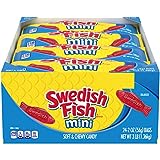 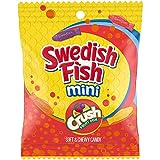 As we mentioned above, there are various reasons why the Malaco company decided to create gummy fish when building a candy to represent Sweden. First and foremost, fishing is a common pastime for Swedish locals, and it’s also a major contributor to the country’s economy.

Countries all over the world import fish from Sweden.

Fish are a major part of the Swedish diet, and Sweden is also home to one of the most significant archipelagos in the world. There’s also a common (and unusual) delicacy in Sweden that few outsiders would dare to try.

Surstromming is a traditional fish of fermented herring. For those who aren’t sure, this means that the fish are left to deteriorate for a while before being eaten.

The amazing Stockholm archipelago: The best islands near Stockholm to visit

Surstromming sits in barrels for several months before it’s placed in tins. The delicacy is often banned from enclosed spaces and airlines because of its insanely strong smell. Fortunately, Swedish Fish sweets have virtually nothing in common with this other Swedish delicacy.

How did Swedish Fish get their name (and other facts)

Swedish Fish got their name from the Malaco company, which clearly wanted to highlight the Scandinavian roots of the sweets in any way they could.

When taking Swedish Fish to market in America, Malaco drew attention to their origins through the stamped word on the side of the fish, their unique flavor, and even the fish design.

The focus on the Swedish background of the fish may be what helped the candies to acquire such a cult following in America. Exotic foods are often on-trend in the States.

According to Candy Club, Justin Bieber is a huge fan of Swedish Fish. The treat is also a common favorite of movie-goers, as the 10th most popular movie candy.

Swedish Fish made quite a splash

Despite an unusual flavor and an odd shape for a gummy candy, Swedish Fish have made a massive splash around the world, appealing to a huge range of people.

Over the years, manufacturers have even adapted Swedish Fish into different colors and flavors — going as far to make a Christmas version of the candy too.

You can find Swedish Fish ice cream, and Swedish Fish crush -a tropical version of the treat. There are also recipes out there that teach you how to make your own Swedish Fish if you have the skill, the patience, and the right ingredients.

However, whether you love the newer versions of the Swedish Fish sweets, or you prefer the more traditional flavors that hail from the depths of Scandinavia, it’s important to remember where these chewy friends actually come from.

Swedish Fish are one of the most memorable candy options ever to spread across the world from Sweden. They’re also a major icon associated with Sweden around the world.

We can only hope that these special candies continue to get the respect and adoration they deserve in the years to come.

Now read these:
—Shining light on Swedish Midsommar
—Getting a taste for surströmming
—Welcome to the Swedish crayfish party
—The meaning of Lagom in Sweden
—Enjoying a Swedish Fika moment

What’s the best spa in Copenhagen? A complete guide

Beaches in Copenhagen: Get some R&R in the Danish capital

Camping in Finland: Exploring the best campsites in Finland