Does anyone live in Greenland? Meet the Greenlandic people

Why is Greenland called Greenland, and was it ever green?

What is Lagom? The meaning of Swedish Lagom

What is Swedish Fika? A delicious Fika definition

What is aquavit? Let’s get into the spirit of aquavit!

The unifying spirit of Scandinavia is on full display with the region’s love of the traditional spirit Aquavit. But what is Aquavit?

Here’s a closer look at the most delicious Nordic export to take the world by storm.

Aquavit is a sharp, biting liquor reminiscent of gin or vodka but with its own unique flavors. It’s often served at bone-chillingly low temperatures, yet it packs a wallop that’ll warm you on cold nights under the Northern Lights.

A shared heritage like so many other aspects of Scandinavia and the Nordic nations underpins aquavit culture. Much as with Scandinavian language, architecture, and food, there are many aquavit similarities, but subtle differences too.

But first let’s find out how Scandinavia became the land of aquavit in the first place.

“Aquavit” is derived from the Latin term aqua vitae, or “water of life” to refer to a distilled beverage that was brought to Scandinavia by German traders in the 1400s.

Initially, aquavit was used as a medicinal treatment for various ailments, as a digestive aid, as a component in making gunpowder, and a cure for alcoholism.

“…some water which is called Aqua Vite and is a help for all sort of illness which a man can have both internally and externally.”

What is aquavit made from?

Carried away by caraway

Aquavit is a clear or light-colored distilled liquor like vodka or gin. In most countries where it’s produced, it’s distilled from grains, the exception being Norway, where potatoes are the preferred base.

Either way, aquavit is typically infused with other ingredients as well. Caraway seeds are a favorite, as is dill. In fact, for a liquor to be defined as aquavit, by EU standards it must contain one or the other.

Unlike brown liquors, most aquavit isn’t aged in barrels. This gives it its clear appearance. The exception is certain Norwegian aquavit varieties that are stored in sherry casks, which lends them a golden hue.

Skaal! How do you drink aquavit?

The culture of Aquavit goes back to the region’s famous forebears, the Vikings.

Some people sip it and some shoot it, and still others chase aquavit with beer — though traditionalists frown on this and say it ruins aquavit’s flavor.

Aquavit is generally served chilled with no mixers. The traditional toast when you drink aquavit is to cheers with the word skaal, sometimes spelled skol or skoal.

Remember to maintain eye contact with your drinking partner throughout the toast — another Viking throwback to the days when you needed to keep a close watch on enemies and supposed drinking buddies alike.

It’s tempting to imagine that the word’s similarity to the English word “skull” has some epic significance, say for instance if the ancient Danish and Swedish Vikings toasted while drinking from the skulls of their enemies.

The truth, however, is somewhat less dramatic.

Turns out it has nothing to do with skulls. Skaal literally means small bowl or drinking cup. The old Norse word referred to a vessel made from shell, not the brainpan of a slaughtered foe.

It’s still fun to say, however!

Often referred to as “snaps,” (aka schnapps) the Danish variant of ancient Aquavit culture is so popular that by the 1800s there were 2,500 distilleries in a nation with a mainland population of just 900,000.

Today Danish snaps is served cold and meant to be sipped. You’ll probably be served a traditional smørrebrød lunch of pickled herring with your aquavit liquor.

Danish aquavit is led by the venerable Aalborg Aquavit brand, easily the most famous and popular.

Theirs is made from neutral grains and may have a light tinge of color depending on what it’s infused with. Aalborg even offers a home infusion kit so you can craft your own favorite flavor.

Next up, Copenhagen Distillery offers unique takes on the Danish schnapps tradition, including a green anise and lemon infusion for a tart, spicy flavor. Also look for the intriguing mulberry rose.

Finally, if you ever have the opportunity to visit Bornholm Island—and you absolutely should—check out Snaps Bornholm. Its unique flavor stems from the organic wheat, the backbone of the spirit.

What’s more, it’s available in traveler-friendly sizes so you can wow the folks back home.

Norwegian aquavit tradition is unique, as they prefer to distill from potatoes rather than grain. By law, Norwegian aquavit drink must be made from at least 95 percent Norwegian potatoes, and much of it is required to be stored in barrels for 6 to 12 months.

Norwegians often serve aquavit liquor at room temperatures in order to bring out the flavors, and they sip it as one would a cognac. You’ll likley be served cheeses and fermented dishes with it.

Linieis the big dog among Norwegian aquavit brands, owing not only to its popularity, but also its unique history.

The name derives from crossing the equator line, which every oak cask barrel of Linie must do—twice—before it’s released into the wild.

This baffling tradition dates back to 1805 when a Norwegian aquavit entrepreneur named Catherine Meinke Lysholm sent out a shipload of aquavit liquor barrels intended to be sold in Indonesia. Sadly, no one bought them and the barrels made the return journey.

However, the Lysholm family was delighted to find that the time aging in barrels in the ship’s hold had changed the liquor for the better.

And why mess with success? Today, Linie is aged in sherry casks that give it a rich, mellow flavor with suggestions of vanilla and an amber hue. And every drop has sailed to Sydney, Australia and back on a four-month journey before being deemed ready to consume.

If you visit Oslo, be sure to try Oslo Håntverks Distillery or OHD. They offer a modern take on Norwegian aquavit tradition, using foraged botanical ingredients found in the neighboring forests of Norway to create uniquely playful and innovative flavors.

Swedish aquavit is also known as brännvin, but you’ll often hear it referred to as snaps. By the 1800s, it’s estimated the Swedes were producing upwards of 100 million liters per year of the stuff.

If you drink aquavit in Sweden, be prepared to learn some drinking songs. There are thousands of documented Swedish snapsvoir songs which they like to sing before each shot at festivals and celebrations like Christmas and Midsommar.

So warm up your vocal cords before chilling them with Swedish aquavit!

O.P. Anderson is the oldest Swedish brand of aquavit, leaning heavily on anise and fennel flavoring. It debuted at the Gothenburg Exhibition Fair in 1891, O.P. Anderson remains the most popular in Sweden.

Gammal Norrlands is aquavit with a literary twist. Named after author Torgny Lindgren’s 2007 novel “Norrlands Aquavit,” this Norwegian liquor features a jaunty amber color and just a hint of sherry.

Qvänum distillery is located at a picture-postcard farm in the Swedish countryside near Gategården, a community that’s been continually occupied since at least the 6th century. They use organic ingredients to craft Swedish schnapps designed to pair with specific foods.

How to get started on your aquavit journey

You might not find a cure for your migraines or acid reflux in a bottle of aquavit, but once you’ve got the aquavit bug you’ll find it can be a lifelong pilgrimage to unlock all the flavors out there.

Here are a few products that can help you recreate that genuine Nordic aquavit culture in your own home, no matter where you live! 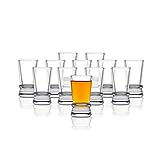 When you’re offering your own  smørrebrød spread for your friends, serve them aquavit in these subtly tinted shot glasses from JoyJolt. They lend a bit of color to help everyone keep their drinks straight, while offering sleek, elegant Scandinavian style.

This set of 12 glasses is for those who appreciate Scandinavian architecture and prefer a “skaal” with a little more heft to it. They come in an elegant box that’s perfect for the Scandophile in your life.

Here’s yet another unique take on the traditional aquavit shot glass, with a solid, heavy base topped by a flaring, yet simple lip around the square glass. Four refined yet remarkably solid and easy to grip glasses will lend a note of Scandinavian common sense to your next aquavit tasting!

Icelandic names: The most popular names in Iceland