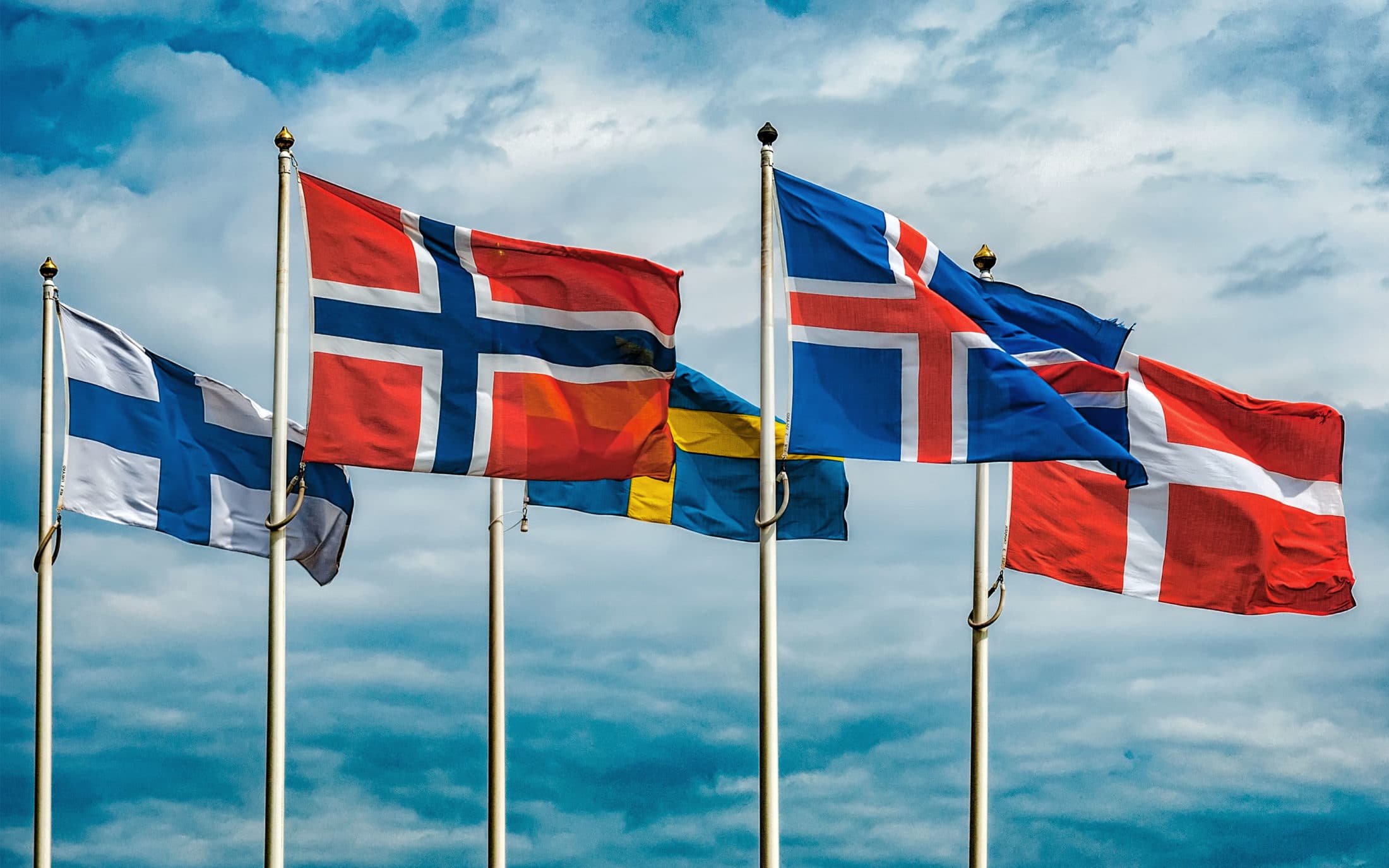 The Nordic cross is Scandinavia’s historical flag pattern, and it stretches to all corners of the region. The same cross also appears in other locations outside of the Nordic realm, inspired by the same roots.

While all of the Scandinavian countries might have the cross design in common, there are significant differences elsewhere in the flag design. Changes in color and other minor details make the flags easier to distinguish.

Today, we’re going to take a closer look at the main Scandinavian flags, where they come from, and what they mean.

The Danish flag was the first to show the Nordic cross, which the country called the “Dannebrog”. It wasn’t until later that the cross design started to appear in other countries throughout the Nordic region.

Designed in red and white, this is the oldest and most consistent flag of any country.

The “Danish cloth” came to the world in the 14 century and served as the base for all of the other Scandinavian flags that would appear afterwards. The white cross on the red background symbolizes Christianity — a common theme in many flag designs.

Just like many countries, Danes fly their national flags on public holidays, military days, and when members of the royal family have a birthday celebration.

Interestingly, there are origin stories for the Danish flag that start during the 1208 Estonia campaign for King Valdemar the second. Apparently, when the Danes were almost defeated, a banner with a white cross fell from the sky and helped to inspire a Danish victory.

The flag of Finland: The Finnish flag

The flag of Finland is very similar to the Danish flag, taking its roots from the same design. Rather than using red and white, Finland’s flag has a white banner with a blue cross in the Nordic cross style. The national Finnish flag first emerged in 1918, and it represents the country worldwide.

Although there are some arguments on where the blue and white colorings come from, many experts say that they shades represent water and snow. This makes sense, as these elements are two things that Finland is very famous for.

For those who want to demonstrate their national pride, it’s possible to fly the Finnish flag at any time.

There are various days when you might see the Finnish flag on the sides of public buildings. For instance, locations often fly the flag on Labour Day, Independence Day, and various election days within Finland.

A special custom in Finland is to fly the flag at Midsummer from 6pm of Midsummer Eve, up until 9pm of the Midsummer’s day.

The flag of Sweden: History of the Swedish flag

Swedish flag history goes back quite a distance, similar to the flag of Denmark. Like the Danish flag, the Swedish flag embraces the Nordic cross, using the colors of blue and gold (or blue and yellow).

These colors come from Sweden’s national arms, and the use of the colors reaches all the way back to 1275, according to many experts.

Interestingly, the Swedish flag doesn’t have a specific date when everyone agrees it first emerged in Scandinavia. However, most historians believe that the introduction of the Swedish flag goes centuries back, to the 16th century.

True evidence of the Swedish flag looking the way it does now goes back to the 1960s only, however.

Every year, on the 6th of June, Sweden celebrates its national flag day. You might also see the national flag flying on various important days, such as May the 1st, Easter Sunday, and the 1st of January.

Similar to the flag of Finland, Sweden also shows off its flag on Midsummer’s Day.

So, what does the Norwegian flag look like? As you might guess, the flag of Norway shares the same Nordic cross as the other Scandinavian countries. This flag has three separate colors — white, red, and blue, similar to the flag of the USA or the UK.

The flag mirrors both the flag of Denmark, and the Nordic Cross.

Norway chose its flag colors based on the French flag. The current design appeared in 1821, when Norway was no longer ruled by Denmark. Eventually, the flag became the official symbol of Norway.

Many people regard this flag design to be very modern, however.

Due to spotty historical resources, we can’t know for certain what the earliest designs of the Norwegian flag might have looked like. However, there are some ancient flag designs available that link to specific people.

The Saint Olav flag comes with a colored serpent in a white mask, for instance.

On a national level, the Norwegian flag appears on the royal family’s coat of arms. One point worth noting is that Norway doesn’t fold its flags, like some other countries do. Instead, the tradition is to roll the flag into a cylinder and place a tie around it.

Usually, the Norwegian flag flies on special days across the country, and music will often play during flag raising ceremonies on days like the 1st of January, Constitution day, and even Whit Sunday.

The flag of Iceland: The Icelandic flag

Since 1915, the flag of Iceland has been Iceland’s official flag, though the king only approved the design in 1919. The colors of blue and white became the national flag when Iceland moved away from Denmark in 1944 and gained its independence.

Iceland added red to its flag at the same time to connect to the history of Norway.

The Icelandic flag is called Islenski Faninn in Iceland, and it’s based on the Nordic cross. According to some geographical professionals, the three colors on the Icelandic flag represents the country’s landscape.

The white recalls the snow and ice that’s common in Iceland, while the blue is for the mountains. The red highlights in the centre of the white cross represent the volcanos through Iceland. According to the laws of the country, flying the flag is not a right, but a privilege.

The owner needs to follow instructions on usage and make sure the design is in mint condition. Disrespecting the flag will lead to imprisonment or a fine.

There are a variety of national flag days in Iceland, including Good Friday, New Year’s day, the birthday of a President, and the first day of Summer. Iceland also uses the flag to celebrate Pentecost and Seafarer’s day.

The flag of Greenland: Greenland’s flag

The flag of Greenland is the official flag in Greenland, and it’s one of the few in the region that doesn’t follow the same style of the Nordic Cross. The flag demonstrates the importance of ice and snow in the region, while the red circle stands out as the sun.

Greenland’s flag also maintains the traditional colors of the Danish flag because Greenland belongs to Denmark.

Greenland first considered creating a flag of its own in 1973, when five people proposed creating a white, green, and blue option. The next year, a newspaper curated a number of design proposals, and polled the community to find the favorite.

In 1978, Denmark granted home rule to Greenland, which meant that the location became an equal part of the Danish realm. The home rule government held a call for official flag proposals, and 555 designs appeared. The deciding committee couldn’t reach a consensus.

The red and white flag officially started life in Greenland in 1985. The design narrowly beat a green and white flag that showcased the Nordic cross.

The flag of the Aland Islands

The Aland islands are an archipelago province at the entrance to the Gulf of Bothnia in the Baltic sea. This autonomous and demilitarized location is the only monolingually Swedish region in Finland since 1920.

The Aland Islands are the smallest region of Finland, taking up around 0.51% of the land area. Though there are thousands of islands in the region, only 60 are actually inhabited.

The flag of Aland first shows the Swedish flag in the background, which makes sense because the country is under Swedish rule. Aland is now an autonomous Finnish province that combines two counties on its flag — Sweden and Finland.

Aland also contains Fasta Aland, where you’ll find 90% of the population. Fasta Island separates from the rest coast of Sweden with open water on the west. In the east, the Archipelago is continuous with the Archipelago sea.

The Flag of the Faroe Islands

The flag of the Faroe Islands showcases the standard Nordic cross in the colors of blue, white and red. This flag is called Merkio by the locals, and it even has its own national holiday on the 25th of April.

Similar to the flags of Iceland and Norway, the Faroe Islands flag forms a natural part of the Scandinavian image.

The Faroe Islands flag dates back to 199 when students from the islands flew the design for the first time, separating Fare Islands apart from the rest of Scandinavia. The Home Rule act in 1948 turned the Faroese flag into the national image for the Faroe Islands.

Does Scandinavia have a flag?

Countless locations throughout Scandinavia have their own flags. Each flag often comes with the Nordic Cross as the central image, although he colors, and other small elements might change.

Aside from country-focused flags, like the Swedish and Danish flags, there are also various smaller provinces and regions that adopt their own flag too.

Scandinavia is also home to the flag of the Sami people. This flag appeared as the result of a unanimous decision made by the Nordic Sami Conference. Featuring the colors of blue, yellow, green, and red, the Sami flag consists of various Scandinavian shades, with a ring to represent unity.

Some people believe that the Sami flag is a take on the traditional clothing of the region, while others say that the ring represents the moon or sun.

If you’re searching for an all-around flag to represent Scandinavia, then you’re in for a challenge. The flags of Iceland, Norway, Finland, Denmark, and Sweden are all very similar, but they have distinct differences to consider too.

While most of the flags throughout the Scandinavian region share similar elements, their differences help to highlight the diversity of the area.

It’s also interesting to take a closer look at the unofficial Nordic flags that appear in various locations throughout Scandinavia too. The Scania flag, and the unofficial flags of Bornholm are great examples of this.

You might also encounter some flags as you travel throughout Scandinavia that support a particular population in a country.

For instance, there’s an unofficial flag for the minority of Finnish speaking people in Sweden. This flag combines the Nordic cross with the colors of the Finnish flag. The blue cross has a thin band of gold around it here, to pull attention back to Sweden too.

Alternatively, there’s also a flag for a minority of Swedish speakers in Finland that consists of yellow and red.

These flags are only common among a small group of people in each region; however, they can offer an interesting insight into the culture and individuality of the people throughout Scandinavia.

The diversity and flexibility of the Nordic cross for the Scandinavian flags has helped the design to expand around the world over the years. Today, you can find countless examples of the same design in regions all the way from Normandy, to the United Kingdom.

To learn more about the wonderful regions of Scandinavia, check out our other insightful articles on Scandification.

What is Finland famous for? Things Finland is known for

What is Iceland known for? Interesting facts about Iceland

What is Sweden known for? Interesting facts about Sweden

How to embrace the Scandinavian hygge lifestyle: Comfy cosy living