Calling Sweden: How to call Sweden from the US and UK

When it comes to traditional Scandinavian snack options, it’s hard to go wrong with a mixture of fresh cheeses.

Here in the Western world, we’re lucky enough to have a good stomach for digesting various kinds of cheeses.

That’s not the case in the Eastern landscape, where severe lactose intolerance is common.

Although there are various other foods in Sweden that generate a lot of love from the locals, like fish and sweets, cheese is one of the options you’re likely to find in most cafes and restaurants.

Today, we will give you an introductory insight into some of the most popular Swedish cheese options, and what they’re like.

So, what are the Swedish cheeses?

An introduction to popular Swedish cheese

Swedish cheese is a popular food for lunch times, snacks, and grazing boards. You’ll often find a handful of cheeses included on a Smörgåsbord.

The Smörgåsbord is a meal originating from Sweden which includes a variety of hot and cold dishes, and it often appears around the festive season too.

Here are some of the most popular Swedish cheeses to consider.

Drommen, otherwise known as Oviken cheese, features raw cow’s milk, and earns its name from a mountaintop near where the cheese is made. Underneath the rind on Drommen cheese, you’ll find a dense and hard cheese, with quite a sharp yet mellow flavor.

Most people find Drommen to have quite a rustic flavor that might remind you of the farm.

Drommen Swedish cheeses often mature for at least 10 months before consumption, and they only contain around 17% fat, making them a good choice if you’re watching your weight.

Also hailing from Oviken, Dura is another common type of unpasteurized cheese, this time featuring raw sheep’s milk. This cheese is quite hard and crumbly, often left to age for at least two months before sale.

The Dura Swedish cheese is a bit fattier than the Drommen option, but it benefits from a complex flavor, with salty notes and even a few notes of coconut.

Like many types of Swedish cheese, Dura features a natural rind. Make sure you cut that off before you start eating.

Many traditional Swedish cheeses feature a lot of raw milks. However, Graddost is made with pasteurized cow’s milk, left to age for about 7 months.

Underneath the waxy rind of a chunk of Graddost, you’ll find a very creamy, smooth mixture, with milk, sweet and almost nutty notes mixed throughout.

Graddost is one of the best Swedish cheese options to add to pasta, pizza, or even toasted sandwiches. This cheese works surprisingly well for melting, and it’s great alongside a delicious white wine.

Semi-hard and often sold in a wheel, the Svecia cheese is a rich, cow’s milk mixture with a waxed rind. This is a slightly softer yellow colored cheese than some of the options we’ve looked at so far.

Generally, popular Swedish cheese manufacturers will leave Svecia to mature for at least 2 months to help build its sharp flavor.

You’ll find Svecia commonly in the lower areas of Sweden, and it might interest you to know that its name comes from an old Latin word for Sweden. Many people around Sweden enjoy Svecia with jam and bread.

However, you could also easily use Svecia in cooking, thanks to it’s melting abilities.

If you’re looking for a truly traditional approach to Swedish cheese, then you can’t go wrong with Wrångebäck.

Among the oldest registered Swedish cheese brands, Wrångebäck has been around since the 1800s, and features raw cow’s milk that sometimes matures for up to 30 months before consumption.

Every wheel of cheese comes with a print of the name included.

These days, the rind on Wrångebäck is washed with salt water, but it used to be waxed until the early 1900s. Underneath that rind, you’ll find a firm, dense and creamy cheese.

Though the smell is a little much for some, Swedes love the tangy and creamy mix of Wrångebäck.

Another popular Swedish cheese, Grevé includes pasteurized cow’s milk that’s left to mature for around 10 months before eating. These Swedish cheeses are similar to Emmental, and they first came from a place called Örnsköldsvik back in the 1960s.

Usually, this cheese will come with a green wax rind, under which you’ll find as creamy, smooth body with large holes dispersed throughout.

If you like a smooth, mild cheese with slightly sharp notes throughout, you’ll enjoy Grevé. This cheese goes particularly well with white wine and beer.

Another cow’s milk Swedish cheese, Hushållsost usually comes in a cylinder, and it’s a traditional, semi-hard cheese that actually translates to “household cheese”.

This is one of the most popular Swedish cheese options around, with some estimates saying that around 15,000 tons are consumed every year.

You’ll find small holes throughout the body of this cheese, but don’t worry — it slices great and melts fantastically well too.

Most of the time, Hushållsost will come in a plastic casing, and it usually matures for around 60 days to gain it’s sour and mild flavor.

Swedes love pairing this cheese with a tart fig jam.

Västerbotten is a Swedish cow’s milk cheese that has a name which refers to the region it comes from in Northern Sweden. The paste comes with small holes throughout, and a granular, firm texture.

Västerbotten has a flavor that’s both sweet and salty, similar to a cross between Parmesan and cheddar. Every wheel of cheese has to age for about 14 months before consumption.

The cheese actually emerged for the first time in the 1800s, who left her cheese to mature for too long.

These days, to see whether the cheese is ready, most cheese makers will need to extract a small piece straight from the center of the rind.

Finally, Ädelost is a common blue cheese created in Sweden as an alternative to the imported blue cheeses from France. This delicious food comes from cow’s milk, and ages for around 12 weeks before consumption.

It’s common to see Ädelost with a thin and pale rind that includes small specs of white, blue, and grey mold.

Ädelost comes with a creamy texture, and it’s often scattered with blue-grey pockets throughout the body of the cheese. Most people describe this Swedish cheese as crumbly, tangy, and a little sharp or salty in places. You can often combine it with balsamic vinegar for a salad dressing.

How to enjoy Swedish cheeses

There are plenty of ways to enjoy popular Swedish cheese options these days. Most of the time, the Swedes have their cheeses paired with a delicious beer or a glass of wine — similar to many cheese lovers worldwide.

You’ll also find that many meals combine various jams with cheese for a unique sweet and savory blend of flavors.

If you want to make the most out of your Swedish cheese experience, we recommend investing in a cheese plane, like this one from LINDEN Sweden, which allows you to easily make even cheese slices without having to fumble around with a knife. 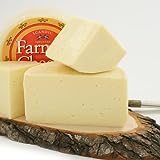 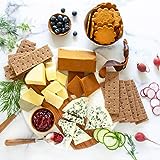 The cheese plane is very common in Sweden, and it’s a great way to spruce up your cheese board at a Smorgasbord party.

You could also consider investing in a traditional hand-held cheese grater, which is a large item, quite like a fork, which allows you to easily shred your cheese onto crackers and sandwiches.

The Boska Holland handheld cheese grater is an excellent example of what one of these devices might look like.

Remember, you can also find a handful of delightful Swedish cheeses available to purchase online, including huge blocks of Hushallsost, and full Scandinavian cheese boards. It might be a good option to order the best Swedish cheese online if you can’t afford a trip to Scandinavia yourself right now.

It’s hard to argue with the universal appeal of cheese. With so many different kinds of flavor and texture to choose from, there seems to be something for everyone on the market today.

If you want a unique taste of Sweden for your next smorgasbord or party event, then you should definitely invest in a selection of traditional Swedish cheese.

Remember, we’ve covered a handful of popular Swedish cheese options today, but there are tons of extra flavors to discover if you know where to look.